Ben and I went to Twisted Spoke to do a hamburger review, together, for the first time. I just want to point out one thing our waitress did that further led to two mistakes.

When she took our order, she did not write anything we said down. We ordered the BBQ Nachos for appetizers, and we each ordered a Fatboy hamburger (each different, see review below).

Because she didn’t write it down, she got things wrong. One, BBQ Wings came out instead of the BBQ Nachos. Two, my burger was supposed to have a pretzel bun, but it instead came with a garlic toasted egg bun. Fortunately, we were hungry enough to just go with the BBQ wings instead. But I did make them correct my pretzel bun problem.

So, on to the review.

I had mine with the pretzel bun, while Ben had his on the garlic toasted egg bun. We split ours in half so we could taste both. So to be fair, I’m reviewing both halves.

One thing to note, these burgers were pretty large. And we only had the regular Fatboy ($8.75). There’s still the Double Fatty ($11.75), which is double the meat. I cannot imagine myself finishing off two of these patties. I only put lettuce, tomatoes, bacon, grilled onions, and BBQ sauce on mine. The burger came with hand-cut fries and a pickle.

Overall, I liked the burger. I first took a bite out of the pretzel portion, and although the pretzel tasted good, it was hard to keep everything contained. Quite possibly having the bacon and tomatoes was making it a little too thick and the BBQ sauce made everything more slippery.

My pretzel portion’s meat was cooked a little more than Ben’s. It was to the point of being almost medium-well, while Ben’s was medium. I do not like my beef medium-well at all. It was a bit too dry. But the bacon was awesome.

Ben’s garlic toasted egg bun was better in my opinion. The bun is a better match to the size of the patty (it’s smaller than the pretzel’s), and at the same time held together better. Ben’s portion definitely tasted better since the meat was more tender.

Things that stood out was how the burger is for meat lovers, nice big/thick, and somewhat juicy. I wouldn’t say the BBQ sauce made the burger, but the bacon was excellent. I would probably give it a higher rating if maybe I ate it differently, say, I split the pretzel bun from the rest of the burger.

The picture above makes the fries look big, when actually they were much smaller than they appeared on my camera phone. This is the burger with the garlic toasted egg bun. 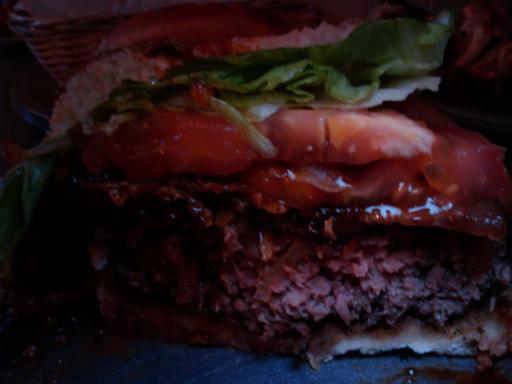 This picture is of the burger with the pretzel bun. Notice how the condiments piling is just as thick as the patty itself.