It’s been a while. Ben, some friends, and I all went to Oak Park to check out Five Guys. Apparently it’s all the rave on the East coast.

Little did I know that their regular hamburgers have two patties in them. Their Little Hamburgers, which I thought were for kids, are the ones that have a single hamburger patty. Anyway, the size was okay, a little bit smaller than what I thought it was going to be for two patties. But still, I wish it was more obvious. Could be that I was just starving and didn’t read carefully.

Anyway, the burger was delicious and everything I thought it would be, and even a little more. They make all their burgers medium-well, which was fine as it was still tasty and soft. It was a good thing too that I only ordered mine with tomato, lettuce, mayo, ketchup, and hot sauce. If I had ordered it with “the works”, I’m sure it would have been even messier to eat.

As you can see from the picture, it is a messy burger to begin with. Even with lettuce and tomato, they’re barely visible on the burger. And now that I mention that, I can barely remember tasting that either. Lots of grease and meat on this bad boy. The hot sauce and mayo definitely gave it a unique taste.

Overall, I liked the burger. I wish the the greasy meat didn’t overpower the rest of the burger so much, but I think that is pretty typical of grease burgers.

I think that next time I go, I’ll get a single patty, with more works on it such as mushrooms and grilled onions. The fries weren’t anything special, so it’s actually good to skip, or at the very least share with others since there’s a lot. The picture below is an order of their regular fries, not large. The fries order is the styrofoam cup of fries along with the fries surrounding the wrapped burger in the brown bag. Yup, that’s a lot. You should see the large order of fries Ben ordered. Most of it was in his brown-bag, and he didn’t even finish what was in his huge cup.

A regular order of fries… 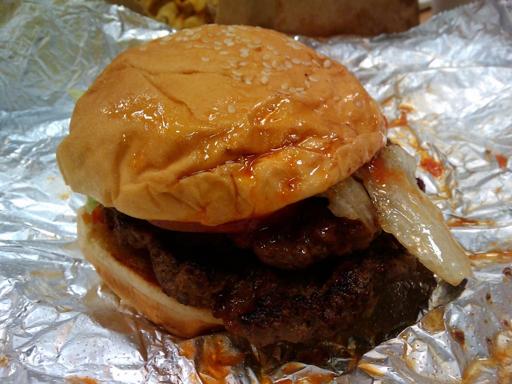 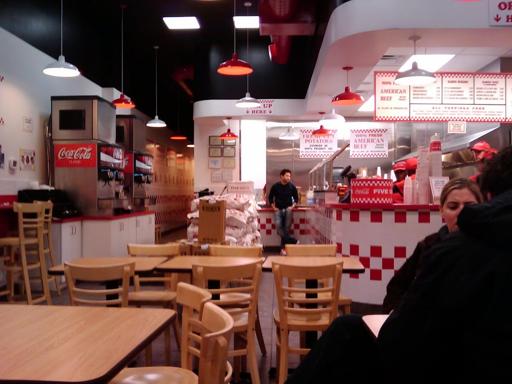 In the picture above, Ben is waiting for his meal. I took the picture when we were all eating our meals. His number was 46, mine was 47, and another friend’s (Minkey’s) was 45. It was just his luck that someone else, took his meal to go and he had to wait while they remade his order while we all ate our burgers.